Some TriCaster owners have found that an external digital A/V routing switcher, such as the Bright Eye NXT410, is an simple tool to expand physical input limitations. The NXT 410 has 4 SDI inputs, 4 HDMI inputs and outputs SDI or HDMI, all assignable.

A/V routers are not the only way to add TriCaster inputs. The direct connection to the soul of the NewTek TriCaster is through its Ethernet Port. It provides access to a world not defined by BNC or HDMI video connectors counts. Connect the TriCaster’s Ethernet port to a Gigabit Ethernet (GigE) switch, and the TriCaster’s selection of inputs can become nearly infinitely expandable.

This article will cover procedures for TriCasters running standard edition software, or TriCaster Advanced Edition up to version 3-2; and will be supplemented shortly with a new section on TriCaster 4-0 and up.

In TriCaster Standard Edition and TriCaster Advanced Edition 3-2 and earlier, the TriCaster’s single Ethernet connection is split internally into two dedicated network video inputs. They are designated Net 1 and Net 2 in the interface and control surface.  Each of these inputs is defined by the unique IP address of individual sources on the GigE switch. If you use more than one IP source, you need a GigE switch for a common private network connection point.

Use the GigE switch for PTZ camera A/V transport and two-way communication. The switch is the connection point for computers and laptops running NewTek’s proprietary iVGA client software to display Windows or OS X screens. It is also the connection point for NewTek’s LiveText application running on an external computer, as well as for video and CG from third party applications. Last but not least, it is the common connection for all private streaming IP sources.

Many of the latest professional video cameras come with built-in streaming IP. If your cameras don’t have IP stream outputs, HDMI outputs can easily be encoded. One system that works well with the TriCaster is the Maevex 5100 Series from Matrox Graphics. The Maevex encoder converts HDMI to an IP stream. The Maevex decoder converts the IP stream back to HDMI.

Figure1: The Matrox 5100 Series encoders and decoders are small, easy to use, and full of handles.

A Maevex decoder can separately feed an HDMI source monitor. The need for full-time individual source monitoring depends on the production. The decoder can also perform other useful functions, such as cross-conversion.

Say for example your TriCaster session is set to 720p or 1080i and you want to use the native 1080p live video or video playback from an iPhone 6. The decoder has a setting to do that. 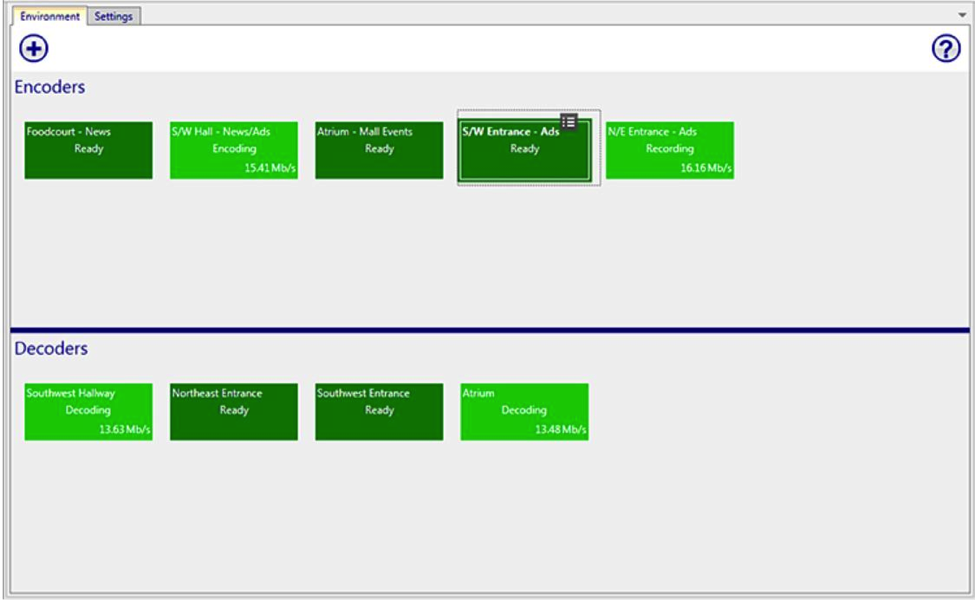 Figure 2: Matrox PowerStream(TM) software can remotely discover and monitor the status of multiple Maevex encoders and decoders on and subnet, and fine tune encoding and decoding parameters.

Operators can encode as many streams as their network bandwidth can accommodate. Each decoder can individually select, capture and display any Maevex stream available on the network. The encoders and decoders are remotely managed by bundled Matrox PowerStream software. PowerStream runs on a PC on the same network. It doesn’t need to always be on or monitored critically, but it gives access to all the options and data settings that give the system its power.

Once the encoders and decoders are in place they can be wired into the system with Cat 5 or by Wi-Fi. For all intents and purposes other than bandwidth and interference limitations, Wi-Fi is a virtual Cat 5 connection.

Tweaking any H.264 codec including Maevex devices is largely a series of trade-offs between bandwidth, frame rate, image complexity and hardware limitations. The Maevex PowerStream software provides access to virtually all adjustable settings of systems on the network. Some are self-explanatory, others deserve explaining.

Nearly every remote camera position and production situation is unique, and many settings require some real-world experimentation for the optimum results. Ron Berty with Matrox Graphics provided some key insight on the less intuitive, more complicated control features.

The encoder settings processor screen in figure ___ (encoder settings jpg) control many parameters. The left-hand column shows the encoder’s IP address, its serial number, and status. Below that is the user defined name, which is attached to the IP stream. Under the Processing tab, the Capture column is easy to understand. The Encoding column is the most complicated.

In the “Favor Quality” Strategy Setting, the frame rate will be lowered if the complexity of the images becomes more than the hardware can handle. When decoded, the missing frames are filled in through frame repeat at the decoder. “Favor Speed” does the exact opposite. Its primary goal is to maintain the frame rate as constant as possible by reducing video quality when necessary.

GOP length can be controlled under the “Group of pictures (GOP)” section. GOP length is the distance in the number of frames between reference I-frames that are fully encoded at a high cost of hardware resources and resulting in relatively high bitrate for the frame itself. The compression efficiency comes from the P and B frames in between 2 I-frames.

The first choice is “Use constant bitrate (CBR),” or “Use variable bitrate (VBR). When variable bit rate is on and the target bit rate is at say 15 Mbps, Maevex will target that bitrate when the content it’s trying to encode is, or becomes, complex enough to use all of that bit rate. When VBR content is not that complex and relatively simple with less movement or action, the bitrate will drop to what H.264 needs to do the job for the quality parameters it is set at.

When CBR is used, Maevex will try to keep the bit rate at a more stable level even when the content is simpler and there is less movement or action. Constant doesn’t mean it will always be at 15 Mbps, but instead of possibly being at 15Mbps at one moment and then at 2Mbps at another it will be at 15 and 10 or 12. Maevex also has an “allow filling bits to sustain rate” option that would avoid going noticeably below the target bit rate when the content is too simple.

The shorter the GOP length, the more work the encoders and decoders must do. Lower bitrates without frame-skipping require a longer GOP. The reverse is also true. Longer GOP lengths also make more work for the encoder and decoder, and the bitrate would be lower.

The optimum GOP length setting depends on your particular content circumstances, network conditions, along with quality and frame rate expectations. Progressive or interlaced make no difference. The interlaced format capture modes supported are converted to progressive before encoding. Maevex encodes everything as progressive frames. 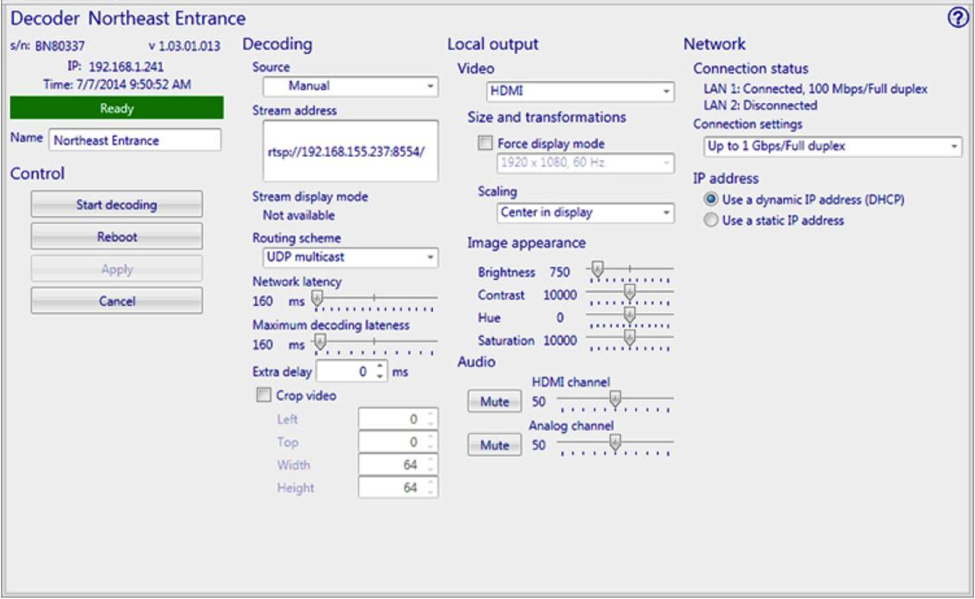 Figure 3: The Maevex decoder has parameter controls as powerful as the encoder.

The main page for the decoder looks similar to the encoder. The left column is quite similar. An encoder source on the network is selectable from a pull-down menu. Beneath the “Routing scheme” selection are controls for “Network Latency” and “Maximum Decoding lateness.”

According to Ron Berty, “These settings can influence the latency of the stream to a degree and they can also help to possibly sync display between decodes to a degree. Additionally, for laggy networks (say many hops from encode to decode location or even when trying to run over VPN and internet ISPs – though Maevex doesn’t really support WAN operation), they might help to reduce packet loss at the decoder by allowing for a greater “buffer” of packets or data on the decoder before display.”

The “Network latency” setting is a pure buffer size for packet collection prior to start decoding a frame. Maximum decoding lateness is an additional delay parameter and allows adjustment of the maximum time allowed for a frame to be decoded, after which it would be dropped for the benefit of the next frame and overall new frame rate / content fluidity. It is the threshold to drop frames that are too complex for the benefit of the overall decoding process. 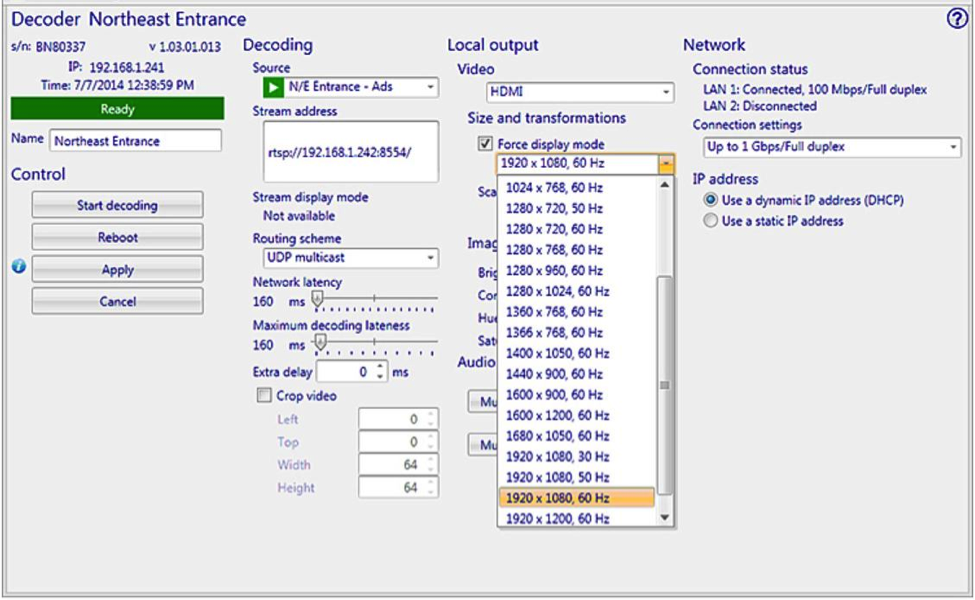 Some of the more interesting features of the decoder are in the “Local output” column. One is the ability to force the HDMI output to provide a desired video format from a different encoder input format. This feature allows the mixing of off-format cameras, such as iPhones, GoPros or fixed output security cameras into a TriCaster session. Images can be scaled, and a full set of processing amp controls on the decoder provide complete image control. Images can also be scaled in a TriCaster M/E.

The proc amp controls must be applied when changed and are most easily adjusted before the production begins. The individual proc amp controls can be particularly handy when multiple decoded sources go through a routing switcher to a single TriCaster camera input.

The ability to receive, decode and bring IP sources to TriCaster control screens and surfaces significantly enhances the TriCaster’s production value by multiplying the number of live sources available to directors and operators and eliminating source distance issues.

Cat 5 and Wi-Fi are not significantly limited by cable lengths as are HDMI and SDI. Most critical eyeballs won’t see a difference between direct copper connections and properly adjusted professional encoders and decoders such as Matrox Maevex.

With TriCaster Advanced Edition 4-0 and beyond, the Net inputs are gone from the interface.  The former Net 1 and Net 2 implementation represented a limitation in that while the system could decode RTMP, RTSP, HTTP, and some other formats, only 2 such signals could be decoded at any given time, given the heavy tasking of the production system.   By dedicating the TriCaster inputs exclusively to using NDI, this overhead issue is removed and all inputs can be assigned to network input.  Equipment or tools that use another protocol instead of NDI, such as the Maevex encoder, need to be input to a system running NewTek Connect Pro.  NewTek Connect Pro provides the dedicated computing power needed to handle a variety of IP protocols and signal standards and convert them to and from NDI, and route them as desired. Adding more instances of NewTek Connect Pro, delivers more videos streams across the network, massively increasing source availability and creative potential.

This doesn’t just serve a TriCaster, however.  A major advantage is that those streams, once encoded as NDI by NewTek Connect Pro, are now available directly to any other NDI receiving device, not just the NDI inputs on the TriCaster. 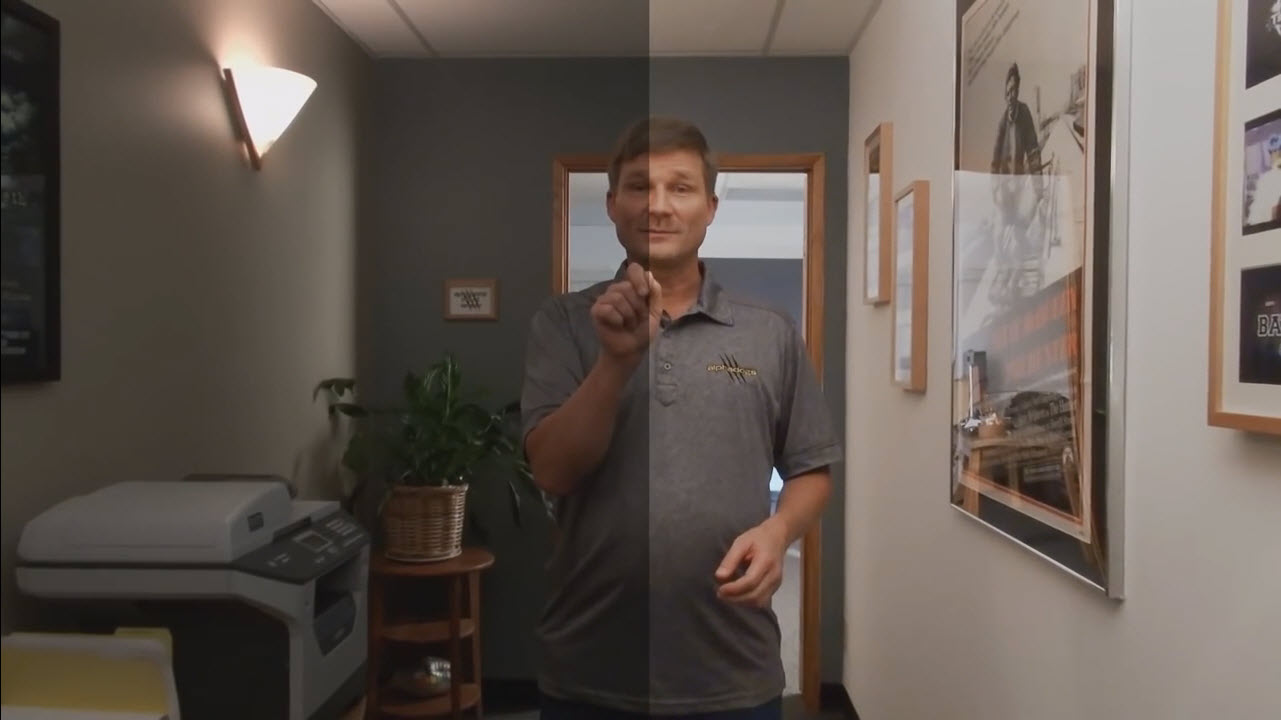 Why Do You Need Color Correction?