DUBAI, UNITED ARAB EMIRATES––With the spectacular Dubai cityscape as its backdrop, the 2014 Flyboard World Cup Championship drew close to 100 professional flyboarders from 22 countries that came to compete in this fledgling but exciting new extreme watersport.

This competition took place in a bay near the Persian Gulf in early December when the weather in Dubai is sunny and perfect. The two daylong Finals, which took place on December 5 and 6, were captured in two 8-hour live webcasts and live streamed to build enthusiasm for the sport.

The Streaming Team, a live streaming production company in Austin, Texas, produced the multi-camera, high-definition webcasts, and streamed them live via their YouTube channel, The HydroSports Network, which provides a live and video-on-demand distribution platform for flyboarding and other extreme water sports. 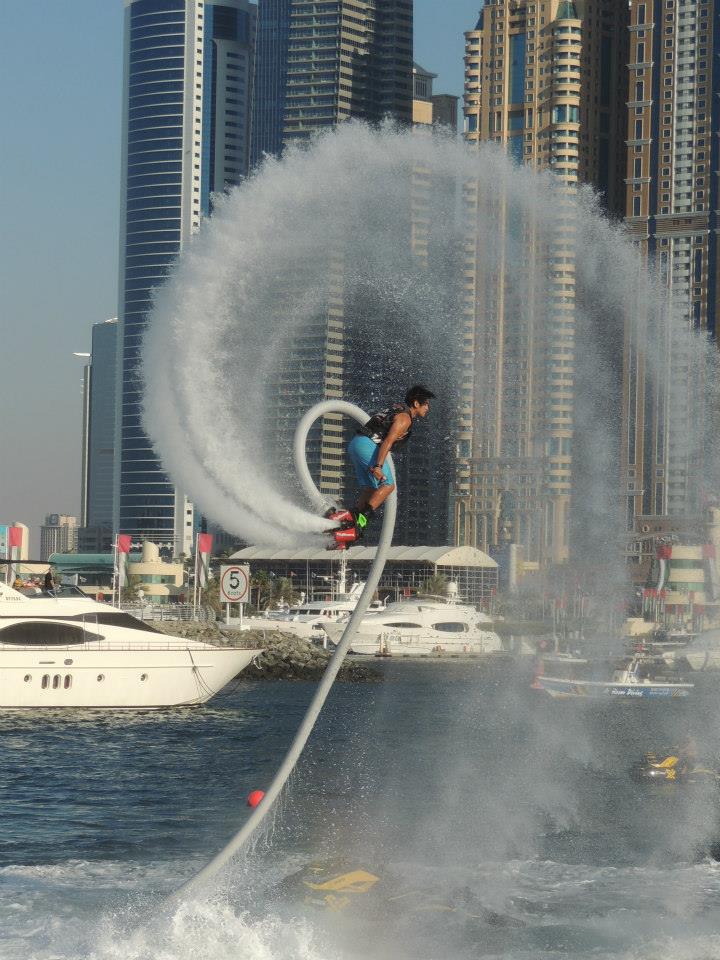 Riding their flyboards, flyboarders surf the air on powerful jets of water as they perform extreme aerial acrobatics. As they skillfully balance to stay upright on the board, they rise into the air, drop low, spin around, and do stunts like double back flips, 360-degree twirls and dolphin and superman dives, where they plunge into the water and immediately shoot back up into the air—like a dolphin or superman would.

“Flyboarding puts the ‘spectacular’ in spectator sport. It creates such a stunning visual that people cannot take their eyes off the competitors. It screams out to be seen on TV. The challenge for us is covering it on a shoestring budget on top of water with limited prep time and crew and in this case – half way around the world,” said Nagy.

At the heart of this sport is specially designed equipment that turns a personal watercraft like a jet ski into the propulsion system for the flyboard. The watercraft thrust is routed into a long hose that’s attached to the underside of the flyboard. This hose feeds water jet nozzles on the bottom of ski boots that are connected to the board.

The jet nozzles under the board deliver enough water pressure to lift the rider up to 15 meters in the air. In dual user mode, a driver on the watercraft controls the throttle for the flyboard rider, which determines the height the rider can achieve. In single user mode, flyboarders use a hand mechanism to remotely control the thrust of the water pressure. Riders continually shift their body weight and balance to maintain the positioning necessary for the aerial stunts. 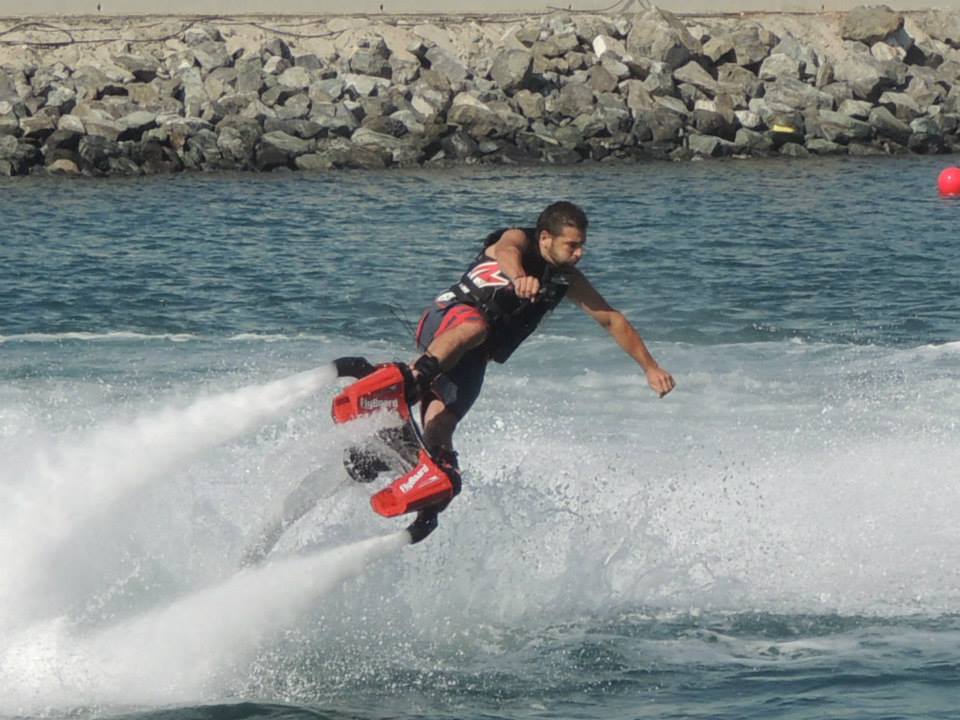 To build a global audience for this new watersport, the 2014 Flyboard World Cup Finals were broadcast as a live webcast from Dubai, including the eight straight hours of coverage on December 5th and 6th.

“Our team had secured live streaming rights for another flyboard event, held in October 2014, which became a successful Guinness World Record attempt to have the greatest number of flyboarders in the air at the same time,” said Tony Nagy, owner and partner of The Streaming Team.

Impressed with the broadcast quality of this live-streamed event, Franky Zapata—who invented flyboarding in 2011—invited The Streaming Team to handle the live production and streaming for his upcoming event, the 2014 Flyboard World Cup from Dubai.

“We’re currently repurposing the 2014 footage into other programs, such as a 30- and 60-minute TV show and feature-length documentary, to promote the sport,” Nagy said. 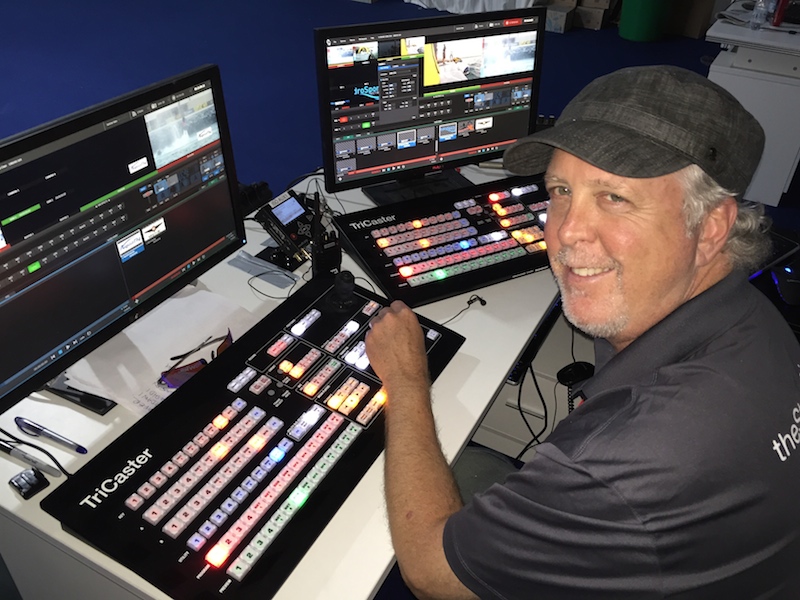 The production was shot and streamed in 720p HD, involved live multi-camera switching between three manned Panasonic ENG/DNG HD/SDI cameras on tripods and a GoPro camera. Camera signals were fed into two NewTek TriCaster 460 integrated live video production switchers, which also iso-recorded each one for use in postproduction. Craig Kneuper served as director, technical director and production manager.

The two TriCaster 460s were daisy chained and used simultaneously to expand the production capability and ensure redundancy, a common practice in live shows. A makeshift control room was set-up on a floating dock in the waters near where the competition was taking place.

On-camera talent Stephanie Wells provided running play-by-play commentary, background about the sport, and interviews with competitors before and after their performances. Whenever Wells needed to get in the water—as a competitor in the women’s division—she handed the mic off to her cousin Brody, another experienced flyboarder.

Aerial footage recorded by a drone camera was also rolled into the production as a video clip. Other video elements rolled in during the live show included pre-recorded featurettes, ads, interstitial programming, program opens and branding elements.

With close to 100 competitors in three divisions—women’s, pro and veterans (seniors)—Kneuper said that many lower thirds needed to be created. The spellings of all competitors’ names and their home countries also needed to be entered into TriCaster and double-checked. Text graphics also included the standings and results from the preliminaries, the quarterfinals and semi-finals of the World Cup event.

Audio was captured with a variety of mics, processed using an audio field mixer (add make and model) and input into the TriCasters. Further audio sweetening was done within the TriCaster during the live shows.

The final programs were output and streamed in real-time directly to HydroSports Network’s YouTube channel.

Based on its success, they’ve been invited to return to Dubai next December to produce the 2015 Flyboard World Cup Finals. 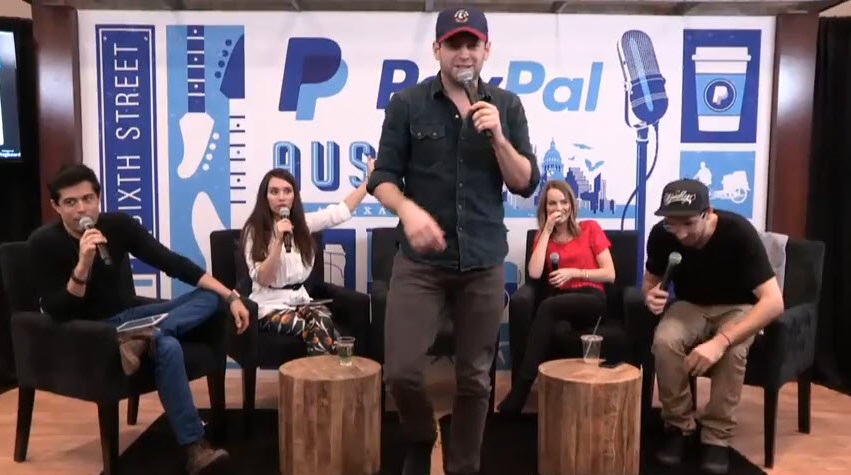 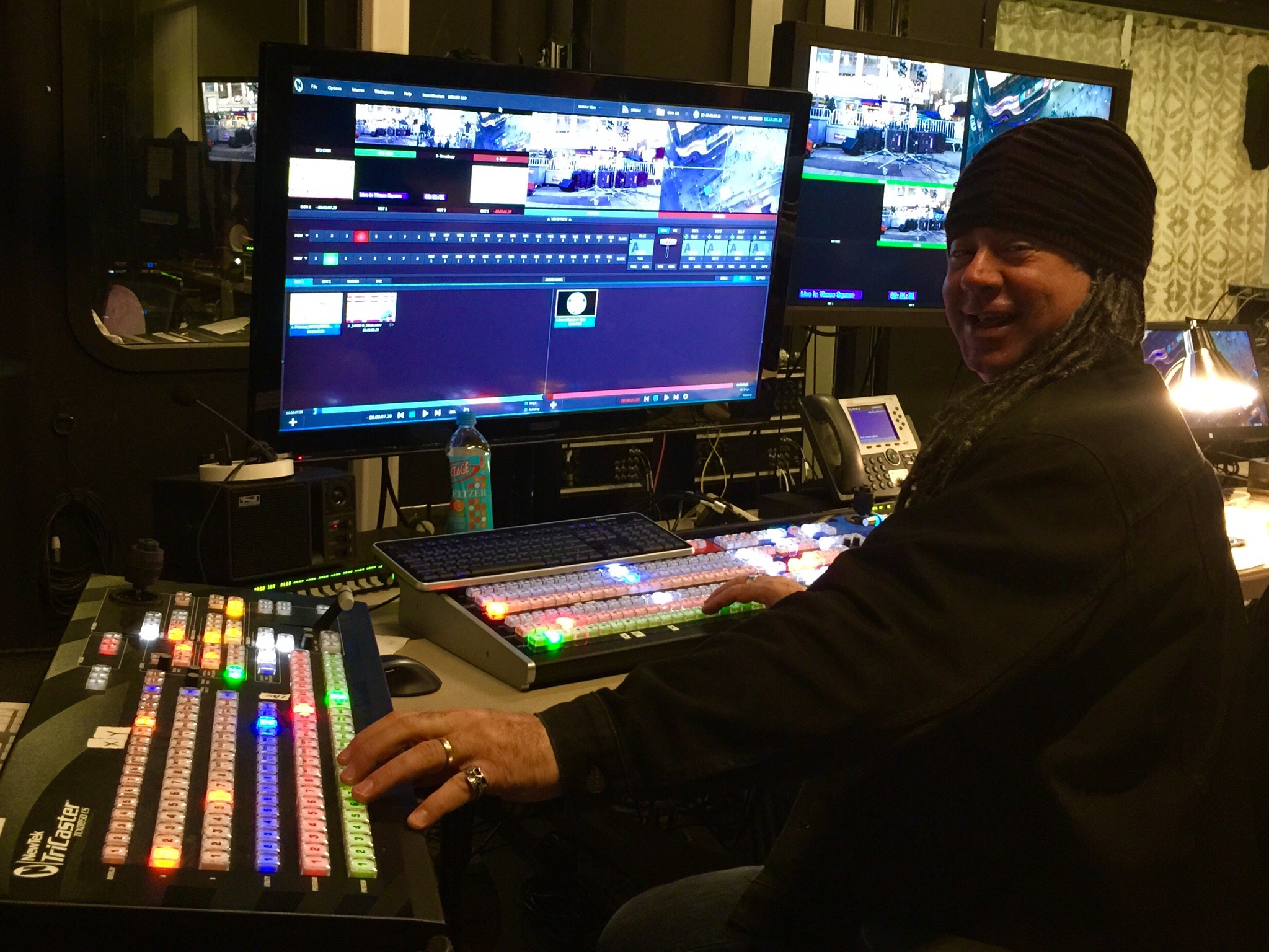